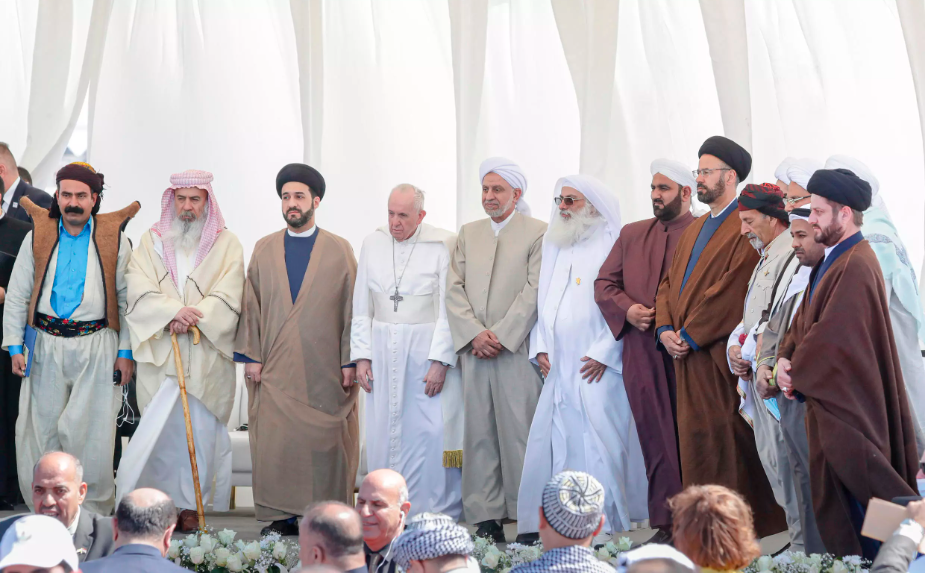 Following Pope Francis’s visit to Iraq, and in view of Adyan’s growing involvement there though networks and programs working for inclusive citizenship, we have thought to share with you a few reflections concerning Iraq’s current situation and the hoped effects of the Pope’s visit for the future of the country.

“After 2003, Iraq started a transition adopting democracy, pluralism, and the rule of law in its constitution. Yet this positive development in theory was not exactly reflected in practice; instability was the order of the day, the economic situation was receding, and the country was witnessing various military conflicts as well as the peak of crime and inhumanity at the hands of ISIS. This burden of instability took its toll on all Iraqis and their living standards, driving large numbers to emigrate, and leading to massive manifestations in all parts of the country.

All this had a doubled impact on Iraqi religious minorities (including Christians, Yezidis, Kaka’is, Sabean-Mandaeans, Jews, and Bahá’is) as well as ethnic minorities (including Kurds, Turkmen, Assyrians/Chaldeans/Syriacs, Armenians, and Shabaks), for they were the weakest link, not finding themselves at the tables were quotas and power got apportioned, and not being a priority for any of the governments that have ruled since 2003.

The lack of policies and laws to protect them and maintain their diversity, the dire economic situation, the lack of a basic social safety network, and the constant security threat, lead minorities to emigrate in large numbers, to the risk of becoming extinct. The number of Christians in Iraq dropped from around one and a half million to around 300,000, with half of them having been displaced. Worthy of note is the fact that the largest part of Christians had been displaced before the emergence of ISIS, during the period of sectarian tension in Iraq after 2003. Baghdad, which was home to most of Iraq’s Christians, is a flagrant example of this. On a more positive note, studies indicate that about 46% of the persons displaced because of ISIS from the Nineveh Plain in 2014 have returned. Yet but the risks remain, in addition to the genocide that targeted the Ezidi population, and their constant plight with displacement, the unknown fate of the disappeared, and the still awaited justice.

The popular and political movement today appears to be a distinct opportunity to put Iraq on the path of stability, to overcome the successive crises, and to move towards the establishment of the state, the rule of law, citizenship, and good governance. Concerted efforts are made by people of goodwill in all fields to push in this direction. Therefore, it was imperative for Pope Francis, named the Pope of Brotherhood, to support these efforts and invest his credibility, moral presence, and fraternal love in serving these efforts. His timely visit to Iraq, despite all the challenges, gives impetus to all Iraqis of good will in their endeavors, as it reminds officials of their responsibilities, and consolidates the roots of the people in their own land.

The Pope’s visit to Iraq reflected the image it deserves, which stems from its history as the cradle of civilizations, the land of culture, and the country of diversity, as it includes 15 cultural, ethnic, and religious groups that together make up the Iraq of long-standing tradition and diversity.

“For me, the visit of His Holiness Pope Francis was a reminder of the richness of Iraq, underlining, on a number of levels, the importance of working for an inclusive citizenship, after all the suffering the country has witnessed, so that it will not be repeated.

At the level of faith, the visit bore the meanings of hope breaching despair, fear, and isolation, as well as a message of solidarity that restores belief in the possibility of a better tomorrow. The scenes of the Prayer in Mosul amidst the destruction, the cross carved from ruins by the Muslim sculptor “Umar”, embodied the power of life over death and the power of cross-communal solidarity for the restoration of social trust.

At the social level, the visit highlighted the richness of Iraqi diversity, which was especially notable in the meetings with representatives of almost all religious groups in Ur and then in Kurdistan. It also underlined the importance of preserving that diversity, whether in culture, education, or tourism, and through solidarity relations between all communities to strengthen social cohesion. The announcement of March 6 as a national day for tolerance and coexistence in Iraq by Prime Minister Mustafa Al-Kazemi is the best proof of the success of this reminder.

At the level of laws and politics, the visit stressed the importance of reassuring the affected and restoring their hopes through rebuilding infrastructure, reparation, and securing safety for all who have been displaced and persecuted. It also emphasized the importance of working on inclusive citizenship and equal rights for all. The visit gave an impetus to all those that have been working on these issues and shed light on the wealth and power that exist in Iraq and that can help it stand up again, despite all the challenges.

Beyond Iraq, at the global Christian-Muslim level, the meeting with Sayyid al-Sistani builds a new bridge with the Islamic world through one of the highest authorities in Shia Islam, after the strong ties that were built in past years with Al-Azhar. Here also, the encounter emphasized that both religions meet in the importance they give to working for the sake of the most vulnerable, the oppressed, and the marginalized, and in their role in defending societal justice, human dignity, and basic freedoms.”

H. E. Dr. Hassan Nadhem, Iraqi Minister of Culture and Member of the Board of Trustees of Adyan Foundation

“The Pope’s visit is a great opportunity for all Iraqis, not just Christians, to establish principles for our country, the first of which being the establishment of constructive dialogue between different cultures, religions and sects, as we do have a dialogue crisis in Iraq. Secondly, the visit addresses the issue of minorities who have inhabited Iraq for centuries and centuries, yet who are subjected to cultural genocide, driving them to leave their country, constituting a cultural hemorrhage that affects the richness of Iraq’s diversity. The visit will thus leave its mark on the need to preserve diversity.

Among the milestones of this visit was the celebration in Ur that will also influence interreligious relations and push forward religious tourism in Iraq.

The milestone of Najaf and the meeting with Sayyid Sistani was a unique historical encounter that will leave a lasting impact. The sight of the Pope and Sayyid Sistani holding hands indicates one way of thinking, despite the religious difference.

As for the visit of Mosul, it will give impetus to this afflicted city after its destruction by ISIS, and will encourage the work being done on the reconstruction of the city and on rebuilding social trust.

Pope Francis’ prayer on the ruins of the churches of Mosul was also a message of peace to the world. And the fact that all Iraqis welcomed His Holiness and rejected extremism was also a message to the world that their religions, the largest of which being Islam, are capable of embodying the values ​​of love and peace. The Iraqis say with the Pope: “Removing even one thread from the carpet can eradicate it.”

Mr. Mariwan Naqshbandi, Director of Relations and Coexistence at the Ministry of Endowments and Religious Affairs in Kurdistan

“The visit of His Holiness the Pope had a positive effect on the hearts of all believers of faiths in Kurdistan and all of Iraq. I specified Kurdistan to highlight the establishment of suitable conditions for diversity in that region. The Pope encouraged the continuation of coexistence and pluralism in the region, and he also encouraged Iraqi Christians in general, and the Christians in Kurdistan, to remain in their land and not leave Iraq. This is the message of love that the Pope delivered to the Kurdish people and the Iraqi people, highlighting the importance of peace and that of silencing the guns, and strengthening human fraternity. He came, in his own words, as a pilgrim, calling on all the sons of Iraq to hold on to the message of Abraham and to live in fraternity.”

Read the below articles in Arabic discussing the historic visit of Pope Francis to Iraq, published on our Taadudiya website:

Image Source: Pope Francis stands with religious leaders during an interreligious meeting near the archaeological area of the Sumerian city-state of Ur, Iraq, Saturday, March 6, 2021. AP – Andrew Medichini