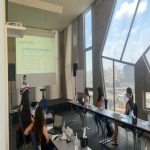 In response to the Higher Committee for Human Fraternity’s latest initiative, under the patronage of his Holiness Pope Francis and His Eminence the Grand Imam of Al-Azhar Sheikh Ahmad Al-Tayyeb, which called people, from all over the world, for a day of prayer, fasting, invocation, and charity, each according to his/her own religion or sect or belief, on Thursday May 14th, 2020, asking God to help us overcome the Corona pandemic, which is threatening the lives of millions of people, to relief us from this affliction, to inspire scientists to discover the appropriate cure, and to save the world from the medical, economic, and other consequences of this detrimental virus;

And as an expression of our national unity, our religious social responsibility, and our global fraternal human solidarity, especially in these hard times that Lebanon is passing through, and with the painful suffering of people withstanding economic and financial difficulties as well as severe hunger, where many of them have lost the ability to secure basic necessities that allow them to have a dignified life;

We commit our institutions and invite all Lebanese and all people to participate in fulfilling this noble invitation through:

First: Fasting on Thursday, May 14th, 2020 as an expression of our cross-communal spiritual solidarity, taking into consideration that this initiative carries a special meaning during the blessed month of Ramadan.

Second: Presenting our prayers and invocations in one voice to God Almighty, each in his/her own way and following his/her own traditions, asking Him to preserve mankind, to help it overcome this pandemic, to support the citizens of this country and those living on this land to be in solidarity with each other and to take part in doing “good” so that no one will lose his/her dignity or life because of want, transforming by that our world into a more human and fraternal one; taking the Virgin Mary, during the Marian month of May, as an example of resorting to God and counting on His care.

Third: Doubling our individual and institutional efforts in helping those in need and securing necessary aid for them, starting with donating a value of money equivalent to what we would usually spend during a non-fasting day to the people most in need around us, and inviting everyone – each according to his/her own abilities – to contribute in supporting humanitarian initiatives, and ending with the commitment of our institutions to multiply their efforts and increase their assistance in this field without distinction between people, since human fraternity forbids us to remain indifferent to those who are hungry or in need.

Various initiatives will be announced following this appeal until May 14th, 2020 and beyond, including media campaigns to promote participation in this event and to strengthen solidarity and fraternity among people all over the world. We also ask all Media to cooperate in spreading the news before the event and to highlight its human and spiritual meanings through allocating specific programmes for that on May 14th, 2020.