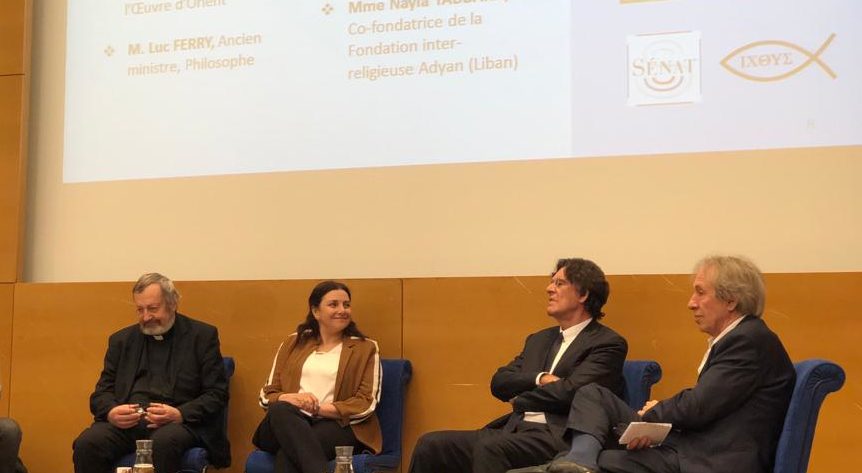 This high-level conference on “The construction of Peace in the Near East through the Promotion of Cultural and Religious Diversity” featured speeches by Gerard Larcher, President of the Senate and Hubert Vedrine, former minister of Foreign Affairs.

Adyan’s mission and work were not only presented by the speech of Nayla Tabbara, director of the Institute of Citizenship and Diversity management, but also by the speeches of Cardinal Louis Raphael Sako from Iraq, who gave Adyan as an example of what needs to be done in the middle east, especially through its work on education and inclusive citizenship, by Fr. Ziad Hilal, from Syria, who also highlighted the work in partnership with Adyan for education of children refugees and IDPs on resilience and diversity, and of Mgr Pascal Gollnish, Director of L’Oeuvre d’Orient, who highlighted the importance of Adyan’s work and message in the region.

While French politicians and thinkers present seemed to focus more on Extremism and fear on the Christians of the Orient, speakers from the Middle east focused on the message of hope of the post-identitarian revival in the Middle East and of the real coexistence and solidarity lived on the ground, urging westerners not to look at the middle east from the lens of sectarianism or essentialisation of Islam, and to think with us in terms of Inclusive citizenship and human rights for all.

In the light of this paradox, Neemat Frem reminded the audience that the identity of Lebanon, as seen by Pope John Paul II, a message of freedom and pluralism for the East and for the West, is more than ever needed to be recognized and promoted. Nayla Tabbara shared how the work done in Aydan on daily basis contribute in transforming the sectarian reality to inclusive societies based on the foundation’s there values: Diversity, Solidarity and Dignity.