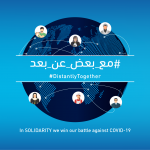 Blessed is the scene of the Lebanese people united, with their diversity, and throughout their homeland from the far north to the far south. They were not only united by the suffering from the economic crisis, but also by their solidarity and awareness of their national role and public responsibility to achieve their common interest in these difficult circumstances.

This is the active and inclusive citizenship, which Adyan has been advocating for, for years, and spreading its values ​​and skills, and still is, among Lebanese youth in schools, universities, civil society and religious activists. It is primarily based on citizens’ belief in their role and ability to participate in public life, based on the common good, and not on sectarian and bigoted interests.

It is a blessed time when our people raise these national slogans, which express the beginning of the process of abolishing sectarianism from their soul.

Adyan Foundation stands with our citizens, in their struggle to eradicate corruption from the nation’s body and its institutions. We are with you to move to a new stage based on good governance, transparency, and accountability, while achieving dignity and justice for all, on the basis of respect for human rights, freedoms, and diversity, and the rejection of violence and conflicts amongst the sons and daughters of the country.